There’s a new .gov on the block: after years of a decidedly dated website, the Supreme Court has a new look — and address — at SupremeCourt.gov. The Supreme Court announced the new site without a great deal of fanfare, sending a release which SCOTUSblog.com posted as a PDF. 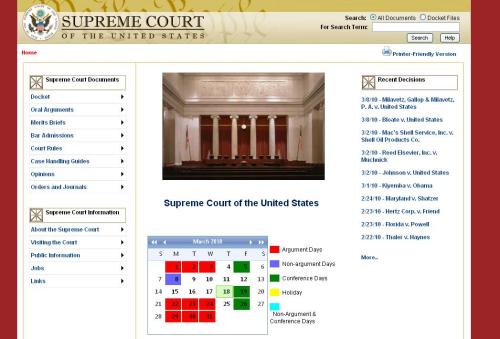 As Orin Kerr observes at the Volokh Conspiracy,  the new site replaces the old supremecourtus.gov and drops “us” from the URL. Users still have to enter “www” in, however, which is less than ideal. C’est la vie.

My Supreme Court preview for 2009-2010 has been a constant source of traffic to this blog, demonstrating a continued interest from the online audience in the cases before the highest court in the land.

Despite the “updated and more user-friendly design,” that the release promised, some users may be frustrated.

There’s a separate concern for the rest of the Web, however: as clicking on the links that post show, SupremeCourt.gov webmasters have not forwarded many old URLs to new ones. Many links simply default to the home page. I suspect a few law librarians around the world may have a headache tomorrow.

It’s going to be a grimace-inducing issue for a few newspapers, too, if redirects aren’t rolled into place. The most-debated ruling of recent months, “Citizens United vs. Federal Election Commission,” in which the Justices rejected campaign spending limits?

That’s now a default link to the SupremeCourt.gov home page from the New York Times SCOTUS story on it. (Google also hosts a PDF of the decision, if a searcher is clever enough to find the cached version.) “Citizens United vs. Federal Election Commission” is up at SupremeCourt.gov. It’s just a new URL. SCOTUSblog.com has the same issue with links to opinions. These broken links are going to be a huge headache for organizations of all stripes if the redirects don’t get implemented.

On the positive side, an interactive “argument calendar” is now up on the front page. Clicking on a day brings up the cases to be argued. Another click brings the visitor to a page with a list of the actions that have been taken, along with a link to “Questions presented.”

For those who visit SupremeCourt.gov in search of recent decisions, one click will bring the searcher to a list of Supreme Court decisions from the current term, rendered in chronological order. If you want to go back further, search away – but good luck going very far back in time. A search for another famous case, “Bush v. Gore,” for instance, turns up very little on the new site. The case is just a click away elsewhere, at Supreme.Justia.com, for instance, or at Oyez.org, where audio of Bush v. Gore may be heard. Given the rich resources that exist elsewhere on the Web, it is unfortunate for information-seekers that internal search doesn’t point elsewhere. Even though legal concerns about endorsements of third-party commercial media concerns may pertain, stated website policies would appear to insulate the court against some of those concerns.

Searching for an individual case is improved over the previous function. The search field is clearly viewable on the top right. For those interested in visiting the court, that information is clearly presented and organized. And a FAQ provides a wealth of information for those “frequently asked questions.”

PDFs aplenty, no XML “in site”

It’s also worth observing that most documents on SupremeCourt.gov remain in .PDF format. On the one hand, that may allow it to be spidered by Google. On the other, PDF is definitely not a machine-readable format. Clay Johnson has made a strong case for why that PDFs are problematic for government. I’m not inclined to disagree, although I’d much rather see cases, briefs and other documents posted as PDFs than not at all. Given the continued reliance on PDFs, however, don’t expect enterprising “lawhackers” to create mashups like the ones surrounding data.gov.

Given the improvements to other federal websites, in particular WhiteHouse.gov and the launch of the FCC’s Reboot.gov, I can’t help feel disappointment. The fact that there is no video or audio of cases remains a standing frustration, given the careful questioning and deliberation the justices display and the long hours of preparation counsel undergo to argue cases before the Supreme Court.

The release regarding the new launch further reports the following

If the public is to benefit further by leveraging the Internet to gain insight into the Supreme Court’s operations, the webmasters of SupremeCourt.gov might do well to focus their efforts in the rest of the 2010 towards implementing further improved functions as well as that fresh design. If they can fix those broken links and supplement existing case pages with external resources, like the Supreme Court Database, perhaps that livestream of oral arguments can wait for a few more months.

UPDATE: For more coverage on the new SupremeCourt.gov, see: