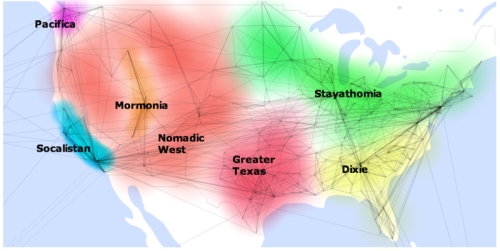 "How to split up the US" by Pete Warden

I’ve been thinking a lot about an essay I wrote last year on the failure of Quit Facebook Day. It was one of the most popular articles I’ve ever published on my personal blog. I think the piece holds up well, given the passage of time, and given recent changes at Facebook, it may become relevant again.

Over at Mashable, Christina Warren writes that “You won’t quit Facebook” in a new op-ed. (Side note: Mashable is a media partner for Facebook’s social news reader. I was surprised that neither Warren nor her editor disclosed that in her op-ed and will leave it to Micah Sifry to ask whether Facebook’s media partners can cover it objectively.)

I’m not so sure of Warren’s larger point. Comments there suggest a few Mashable readers have left, which is minimum an interesting data point, given the rather social audience we know visits the site. BrianBoyer left tonight and livetweeted his exit, linking to a post on “why logging out isn’t enough for partial explanation.

As a news application developer – a so-called “hacker journalist” – Boyer has a different relationship with technology than many members of the media and public. He makes the platforms and works at a newspaper company that sells ads against them. He’s commented on journalists using Facebook before and now has acted on his convictions.

Whether many others follow, I think, will depend upon whether there are substantive harms to users that result from the changes that are subsequently publicized by print and broadcast media, changing the perceived risk around usage. When whether anyone in the social journalism group would quit Facebook (closed group), the overwhelming answer was: no. That’s not surprising from that particular cadre of the media, of course. There’s a vibrant discussion around this post over at my first draft on Google Plus where others feel differently. (The convergence of Google and online privacy deserves its own post, which I have written elsewhere.)

I’m not predicting that will happen but I can foresee several different scenarios where unexpected sharing of reading or socializing behavior could have consequences to work, employment, education or relationships. @Mat Buchanon of Gizmodo explored the new Facebook integration more eloquently than I and at some length here:

There are significant benefits to be gained from social sharing, as my publisher Tim O’Reilly has outlined at Radar and in his talks. I have enjoyed many of them, given my frequent user of social media, and expect to continue to do so, with care.

That said, I do not want to have all of my actions online shared, nor would I wish those of marginalized segments of society to be made public if it endangered their safety.

I’ve talked with senior executives at Facebook several times, including its CTO and chief security officer and chief privacy officer. My sense remains that they all want to do the right thing by the people on their network, providing them with better tools to share information, keep them safe and give them better privacy controls… although the persistent cookies that remain upon logout pose an issue on the latter counts.

All that said, I can’t help but wonder if these changes will tilt the balance for more users. We’ll learn more over the coming months.

If you use Facebook, you need to read this New York Times article on new changes and think carefully about how much of your activity online you want to share here publicly.

From reading to listening to watching to buying, anything connected to Facebook will be tracked, logged and added to the growing body of information about your life online.

As with so many other aspects of our lives, we all owe it to ourselves to be educated about our digital choices.

To be clear: while Facebook is the biggest social network on the planet, with some 800 million users that spend more time on it than any other site, the issue of digital privacy is much larger, as anyone who has read the Wall Street Journal’s “What do They Know?” series or followed the issues knows well.

I covered all of last year’s FTC privacy hearings and was reminded of just how broad and deep the issue of digital privacy runs. New online privacy frameworks are lagging far behind industries that are crunching unprecedented amounts of data to try to target and personalize everything we buy, read, eat or watch. Location-based services have new bearing on online privacy. Last year, online privacy debates heated up in Washington. Expect more of the same.