My colleague, Elaine Hom, was kind enough to invite me to sit in on her website’s monthly podcast, “Reality Check.” In the episode, I offered up my “Top Twitter tips and the best Twitter tools”

I was well-caffeinated, as you’ll hear, but I’m generally quite proud of the final product. I hope others will find is useful for navigating Twitter in an efficient way and make some meaning out of that noise.

A better definition for cloud computing? I know a thing or two about defining IT terms. Some concepts, however, are so nebulous or fraught with marketing hype that they beggar most attempts.

I was assigned “cloud computing” for WhatIs.com eons ago. (Actually, in 2007).

The definition has been revised since that first attempt — as one might expect — but the one liner that remains is apt:

“Cloud computing is a general term for anything that involves delivering hosted services over the Internet.”

Much as I hate to admit it, I prefer a distilled version of Wikipedia‘s current definition for cloud computing (as of May 20, anyway):

“Cloud computing is a computing paradigm where dynamically scalable and often virtualized resources are provided as a service over the Internet.”

After I posed the question of a definition on Twitter, Chris Hoff passed me a note with the following elements that he would suggest for a cloud computing definition:

Hoff called out a quote from Interop today as well: “Cloud computing is not a technology, it’s an operational model.” (Forgive me — lost the attribution.) The point the speaker was making — and it’s not a new one — is that cloud computing is itself made up of hundreds of other technologies and subsets, including storage-as-a-service, software-as-a-service, etc.

For more on those elements,  go read Hoff (aka @Beaker) at his blog, “Rational Survivability,” where his “Update on the Cloud (Ontology/Taxonomy) Model” provides considerable insight into the bits, bytes, models and pieces.

There’s a good discussion of a definition for cloud computing over at “Cloud Talk,” too. 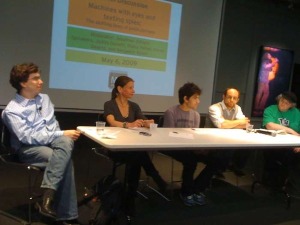 “Big Brother has nothing on growing up as a minister’s daughter in a small town.”

Shava Nerad, Development Director / former Executive Director of the Tor Project, offered that trenchant observation in the context of a panel on privacy held at the MIT Museum earlier this month,”Machines with spies & texting eyes: The shifting lines of public/private.” As she noted, she’s been writing provocative things on the Internet since 1982 so this isn’t exactly out of character.

The event put special focus on the MIT Media Lab‘s Sociable Media Group’s exhibition, “Connections.” When asked about the purpose of the exhibit, Donath said that “We wanted people to step back and think about privacy. One mundane step after another has brought us to a deeply transformed world.”

Shava noted that “mischaracterizations of your identity are more likely to result than the real thing at the exhibit.” That result is “an artifact of scraping,” where data is pulled from many pools online without context or interpolation.

In general, the exhibit is meant to pull into focus Donath’s central question: “What is the cost we have to pay in terms of privacy to cement society together?”

You can take a virtual tour of the museum (from 2008) below:

Using the dry wit that makes his public appearances so enjoyable, Zittrain kicked off the panel with an explication of prurient. As he noted, prurient is a “funny word.” It refers to something that attracts you and then a moment later disgusts you. It’s wholly applicable and useful to our relationship with privacy in our changing world, as lifestreaming, Twitter, Facebook and mobile technology rapidly intermingle our public and private selves.

As Norath noted, “we’re all leaving trails of data…email, every time we comment, when we go through FastLane, when we go shopping. Some we’re aware of, some we’re not. There’s a growing shadow behind us.”

The privacy panel recognized that the data trails left by teens online may be particularly meaningful for future employment or educational opportunities. Is acting out on Facebook a way of showing off imperviousness?

Regardless, a “data shadow” is a useful metaphor for these data trails that accompany our online activity, especially when combined with the work of the Sunlight Foundation and Watchdog.net, the “good government site with teeth” project started by Swartz. It’s safe to say that we’re all watching each other now. Adding to the lighthearted but thoughtful tone of the discussion, @aaronsw recalled the day @EFF‘s Kevin Bankston was caught smoking by Google Street View.

Benjamin Waber noted that with Bluetooth scans on cellphones you might be able to accurately track who might be infected by a disease. As Zittrain quipped on one case, referring to swine flu, you could even epidemiologically trace it back to “Pig Zero.”

Waber makes the comparison to the membership cards offered by Shaws that enable consumers to receive discounts in return for registering. “If we owned our Bluetooth data, could we sell it? You get something for your data, for giving up your purchasing patterns. If your cellphone distributed certain information, would you be willing to trade it?”

The panel took note of the cultural differences between Japan and the U.S. with regards to @Google Street View. Protections around privacy and awareness of the impact of mobile video on it are greater there, perhaps by virtue of the technological edge that exists with Japanese society. Does greater tech penetration result in greater awareness of privacy issues? An Aussie in the audience notes that this privacy discussion appeared to be predicated by being held in the U.S. “When you’re a net importer of culture, you’re used to skirting around things.”

In Waber’s case, certainly, one would have to note that the privacy discussion is both academic and our in the real world. He passed around the “sociometer” that Waber and others are using to conduct research with at the Media Lab. Zittrain quipped that it “reminds me of an alithiometer” — a reference to Pullman’s “His Dark Materials” epic fantasy trilogy. This geek guffawed. To be fair,  in many ways, this device is downright magical, at least when its simple form factor is compared to its function. A sociometer is a wearable sensor package for measuring face-to-face interactions between people.

Afterwards, I was lucky enough to go out for Chinese with the panelists , where@zittrain further moderated a “roundtable” on the potential for malicious use of@Amazon‘s Mechanical Turk. @aaronsw @bwaber and @zephyrteachout and others contributed to a vigorous discussion of Google’s role in privacy, dominance of search and the role of citizens and law in encouraging more transparent government and corporate practices.

There’s more on electronic privacy and online governance at the Complexity and Social Networks Blog at Harvard and some thoughtful comments on the event page on Facebook.

We had to respond to a bit of a curveball this morning on the Mass. data protection law. A MA Senate Bill significantly alters certain provisions. I reported on it today and will be reviewing it further tomorrow.

There’s a bonafide Twitterstorm on today after a post from Twitter co-founder @Biz Stone indicated that the service would be changing the way it handled @replies. Just check out #fixreplies.

Here’s what @Biz posted to the Twitter blog yesterday:

We’ve updated the Notices section of Settings to better reflect how folks are using Twitter regarding replies. Based on usage patterns and feedback, we’ve learned most people want to see when someone they follow replies to another person they follow—it’s a good way to stay in the loop. However, receiving one-sided fragments via replies sent to folks you don’t follow in your timeline is undesirable. Today’s update removes this undesirable and confusing option.

The Importance of Discovery

Spotting new folks in tweets is an interesting way to check out new profiles and find new people to follow. Despite this update, you’ll still see mentions or references linking to people you don’t follow. For example, you’ll continue to see, “Ev meeting with @biz about work stuff” even if you don’t follow @biz. We’ll be introducing better ways to discover and follow interesting accounts as we release more features in this space.

We’re getting a ton of extremely useful feedback about yesterday’s update to Settings. The engineering team reminded me that there were serious technical reasons why that setting had to go or be entirely rebuilt—it wouldn’t have lasted long even if we thought it was the best thing ever. Nevertheless, it’s amazing to wake up and see all the tweets about this change.

We’re hearing your feedback and reading through it all. One of the strongest signals is that folks were using this setting to discover and follow new and interesting accounts—this is something we absolutely want to support. Our product, design, user experience, and technical teams have started brainstorming a way to surface a new, scalable way to address this need.

Please stay tuned and thank you again for all the feedback.

Talk about real-time feedback and response! I’d like to hear more about the technical reasons behind the change.

In the meantime, however, I’d like to propose a simple fix to the Twitter community to preserve the “cocktail party effect” whereby you can catch snippets of interesting conversations and then tune into them and their participants:

Add RE to the beginning of your tweets in front of a given username.

Since, as Laura “@pistachio” Fitton pointed out this morning, @replies were a community generated convention, it’s quite straightforward to continue that practice and introduce a way of indicating to everyone that you are are @replying to someone.

At some point, stats wizards can pull out who gets the most RE @ them, just like they have analyzed the RT (retweet). In the meantime, this will “surface” a person for everyone. And, since Twitter and other clients automatically now default to “@mentions” instead of direct replies, we can keep on chatting.

RE is all of two characters to add, plus a space. Yes, 3 spaces out of 140 is a bit dear, but in this writer’s opinion they are worth adding to buck the filter.  I’ve posted a comment on the Top 15 Twitter Acronyms to add RE to the list. I hope that RE catches on, as I’d really miss those snippets of conversation.

Video: A vision of the future from Microsoft Labs

The president of Microsoft‘s business division, Stephen Elop, showcased a video from Microsoft Office Labs at the recent Wharton Business Technology Conference. The five-minute long video more than hints at what Microsoft imagines mainstream information technology will look like in 2019. Pure awesomeness. Saw it in March and publishing it now ’cause it’s still worth viewing if someone happened to miss it.