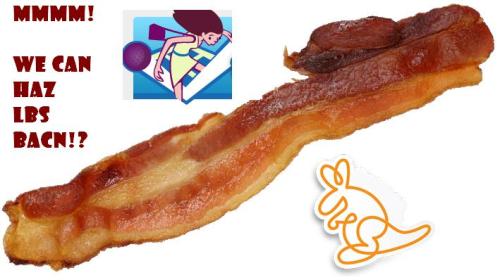 Over the past year, I’ve grown increasingly frustrated by the prevalence of notifications about mayorships and badges on Foursquare or finds on Gowalla.

During the SXSW festival, it grew monumentally worse.

As location-based services (LBS) like Foursquare and Gowalla have picked up users over the past year, many of them have chosen to share their activity on Twitter.

I have a term for that sort of notification, pushed towards followers: “LBS bacn.”

I define LBS bacn as default notifications from location-based services that are autoposted to social networks.

In my view,  LBS bacn adds bits and bytes of “datafat” to otherwise useful lifestreams. For those who aren’t familiar with this porktacular digital slang, Wikipedia defines bacn as:

“email which has been subscribed to and is therefore not unsolicited, but is often unread by the recipient for a long period of time, if at all. Bacn has been described as ’email you want but not right now.'”

“The term was coined in August 2007 at Podcamp Pittsburgh, a social media “unconference” attended by bloggers and podcasters. The term “bacn” was chosen because of its similarity to spam. Both are popular pork products and both can fill up your inbox pretty quickly. The term “ham,” by way of contrast, is sometimes used to refer to email that a user wants to both receive and read right away.”

Some of Foursquare, Gowalla, BrightKite or other location-based service post can be useful or entertaining. After all, a location is a relevant response to Twitter’s original question: “What are you doing?” After all, it’s not so far off as an answer to the new question, “What’s happening?” either.

Annotated locations are even interesting, in most cases. One of the best check-ins of that sort pushed to Twitter came from Amy Senger, who tweeted:

But LBS bacn, at least to me on Twitter, is not. As ever, with Twitter everyone’s approach will be different. And if LBS bacn gets too much from a given source, it’s much easier to stop reading it then to give up bacon in the real world: you can just unfollow the bacnator. I don’t hate the idea of a location-based services, or the people that use them,  although location-based services do raise online privacy concerns. Everyone will can — and will — use Twitter differently, so don’t please take this as me telling anyone what to do.

I’m just as tired of reading LBS bacn as I am of notifications from Facebook or updates that I have new friends on Friendster. No, Seriously.