4 tips for social media optimization on Facebook from Robert Scoble

NYU journalism professor Jay Rosen has been trying to trick Facebook’s algorithm by starting his updates with “You guys! Exciting personal news: I’m moving to New York!” and “Big news in my personal life. I’m engaged!” and “I have some exciting personal news. A new job!”

What Rosen is experimenting with here is social media optimization (SMO), or the art and science of getting your updates seen on Facebook and other platforms. In 2014, SMO is still something of a dark art, but in an age when people are using social media to discover news, getting seen there is now as important to media, marketers and public officials who want to find immense audiences online as search engine optimization has become over the past decade.

Without this hack, Rosen says, “Facebook won’t show my posts to nearly all my subscribers.”

When they are shown, they get good engagement. The hack puts them in front of people who never received a thing from me, despite subscribing to me.

Robert [Scoble] and Dave [Winer] are telling me it won’t work for long and I am sure that’s true. Meanwhile, I have many people telling me they never saw my posts and now they do.

Rosen’s tactic prompted Rackspace’s startup liason officer, Robert Scoble, a power user of social media platforms, to make several suggestions for crafting Facebook updates that get seen in the newsfeed. Here’s a short, paraphrased summary of those tips, courtesy of Robert Scoble’s comments on an update in Rosen’s feed.

1) Short, one paragraph updates often get more engagement than updates with a photo.

2) One photo in an update often gets more engagement than an update with multiple photos.

3) Including a call to action with a URL like “Click here for insight on open government, technology and society: http://e-pluribusunum.com” in an update leads to 80% more clicks.

4) Sort your friends into lists and then remove friends who don’t engage from those lists. (This is different from unfriending them.)

I’m both personally and professionally interested in this advice: I have 129,000 subscribers to my public Facebook updates but am quite certain that the vast majority never see what they subscribed to when they clicked the “Like” button. While the rare Facebook update blows up, many are just never seen.

1) Have you tried these techniques? If so, what came of it?

2) What other SMO tips do you use?

First, just as blackhat SEO leads Google to penalize people for gimmicks, Facebook could flag pages and profiles that overuse them, leading to account issues.

Second, marketers, social journalists and community managers that find success with SMO experiments should take note of a recent Pew Research Center survey on social media and the news, the source of the graphics on this page, which found that “visitors who come to a news site through Facebook or search display have far lower engagement with that outlet than those who come to that news website directly.” That means that SMO doesn’t replace SEO for publishers, or the need to create great stories and interactive content that stands on its own. 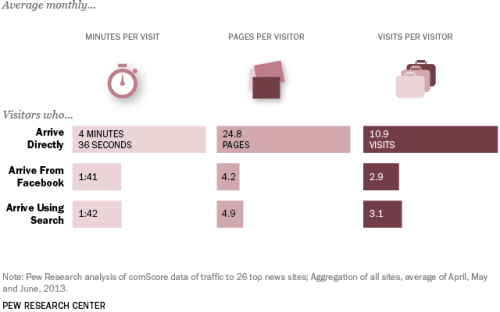 Finally, it’s worth noting that social networks are full of people. Ultimately, the best way to “optimize” your interactions on Facebook or elsewhere is to be a human, not a marketer. Meaningfully communicating with other humans is going to require a different strategy than crafting headlines and URLs that highly relevant to search engines.

"Be human. Be humane. Be yourself. Be interesting. Be brief. Share. Laugh. Listen. Learn. Repeat."~@ikepigott | Tao of Twitter

Will social search on Facebook be Google’s toughest challenge yet?

On further reflection Facebook’s announcement regarding upgraded search could be the biggest tech news today.

Why? Well, Facebook graph search for posts and updates will make the network MUCH easier to discover fresh content relevant to a given person, place or thing, both for journalists and regular users.

Combined with a “business graph,” locations and secure payment systems, such a search engine could become useful to a billion Facebook users quickly.

Over time, searches will generate a huge amount of interest data and potentially a new source of revenue, if Facebook adapts Google’s model of selling ads next to results.

Search for Twitter, Tumblr, Google+ and other mobile social networks to come could well evolve similarly, if not at the same massive scale.

Agree? Disagree? Thoughts? Have links to better and/or relevant analysis? Please share in the comments.

Update: Commenting on Google+, open standards advocate Chris Messina agreed that this is notable news, although how big “depends on coverage for normal searches (which would determine search quality perception) and the relative impact of the corpus being mostly ACL’d content.”

Still, wrote Messina, “it’s a big deal, especially if Facebook can annotate that data with intent/verb-based apps. For example, query: “restaurants in New York City that my friends like and I haven’t been too”. I’d expect to see apps I use in the results, like OpenTable or Foursquare.”

He also raised a wrinkle I hadn’t considered: “That’s another aspect of this that becomes big for developers (at some point) — search as a personalized app platform.”