“It doesn’t have to be like this,” said Alexis Madrigal. “You don’t have to write bad stuff to get people to come to a website” 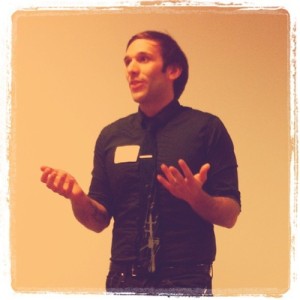 Tonight at the August meeting of the Online News Association in D.C., +Madrigal shared several of the tools that he’s been experimenting with to connect with his audience and rethink the way he shares information in his work as senior editor at the Atlantic Monthly.

You can find his digital journalism at www.theatlantic.com/alexis-madrigal and on Twitter at @alexismadrigal.

I’ve been reading his book on green energy, “Powering the Dream,” over the past few months. It’s excellent. Alexis also co-founded longshot magazine and wrote for Wired for years.

Given that context, when he talks about the digital tools that he’s using for work and the new applications or platforms that he’s experimenting with online these days, I paid attention. Here’s the breakdown of some of the tools he shared tonight.

First, Google Forms. Alexis described them as “frictionless, easy to set up, and then pull into spreadsheet. He referenced Amanda Michel‘s work using them in her crowdsourcing work at ProPublica.

Second, SoundCloud. That was a new one to me. Time to experiment.

Third, Twitter. This one was not new to me. Alexis said Twitter worked very well for Longshot. He did, however, say “the retweet is dying.” There’s an issue of splitting the incentive model, between “native” vs “manual” RTs, and tracking. Alexis said that he’s noticed all around that retweeting is way down, which has made Twitter less effective.

So, off to explore new places.

One such platform is Tumblr. The problem, said Madrigal, is that Tumblr has its own ecosystem. (I agree with this.) There’s no natural move over from another social media platform, he said, and that sad fact is that you have to put in the same damn work, and then see what moves. On that count, they’ve brought in curator to the Atlantic video channel who’s deeply immersed in the culture but it’s still challenging.

Another new destination is Google Plus. Alexis likes Plus conceptually, given how it allows back and forth, but doesn’t know exactly what he’s going to do with it yet. Alexis said he has largely left Facebook and streamlined his social media use. His Google Plus use went way up during the first couple of days and then leveled out. Now he needs to decide what to do with it. (I know the feeling). Alexis is experimenting with “The Atlantic Tech Plus,” which he described as a behind the scenes look at what his team is working on. He’s not sure what’s next. The digest has driven little traffic to date, but Alexis feels like he “has to be here and know how it works.”

Alexis moved from tools for publishing or sharing to presentation tools. He’s interested in timed slideshows and made the analogy that they’re like “full bleed” in a magazine. He used to think they’re just a way to get pageviews but now he thinking that they’re “a way to get content horizontally. ”

Two points here: beautiful tools are awesome and people are limiting themselves in the way they think about them. In that context, Alexis wants to exploit the behavior readers exhibit in compulsive clicking through a slideshow for good. This sort of thing is “gamification,” though Alexis notes that they just ran a story “called gamification is BS.”

Given this list of of tools, I asked him about Facebook for journalism. Alexis said that he chose to keep who he is as a person vs his work separate there. He hasn’t started a Page but knows people like science writer Steve Silberman who have had “wonderful generative conversations there.”

Finally, Alexis shared two sites that are doing work that can push us to think differently about what an editorial product can be online.

DomusIT (http://domusweb.it) is an Italian art magazine website worth looking at because of its vibrant, colorful and dynamic design:

Zeega (http://zeega.org) is a next generation content management system. Zeega pushes website design to a “crazy extreme,” with HTML5 in fully full bleed experience, including video, animations. Alexis suggested that Zeega can enable a different kind of publication online, something “more magazine-y” and interesting. Less cookie cutter. He expects that this or something like it will open up a new way of telling stories.

We’ll see! I know I have some new places and platforms to explore, along with Twitter, Google, Plus and Tumblr. The lesson that Alexis drew from turntable.fm is that “feeling like the Internet is alive is awesome.” I’ll drop by tomorrow.

2 responses to “New digital journalism tools and platforms to connect, present and inspire”