If technological change is exponential, how can government adapt?

Can the agile development cycle be applied to government? Cory Ondrejka, c0-founder of Second Life, offered up a provocative paean for more flexible adaption to new online platforms for citizen engagement and empowerment. “Who will know first if the rules have changed: customers, partners, clients?”

Ondrejka drew a fascinating parallel between today’s open government movement and an open data case study from another age: the Era of Sail.

In the The Physical Geography of the Sea,” published in the mid-1800s, a disabled sailor who could no longer serve as crew found something to do from ashore: aggregate the logs of weather, winds and current.

As Matthew Fontaine Maury started aggregating that data, he found patterns. Maury saw great value in publishing this data “in such a manner that each may have before him, at a glance, the experience of all.”

Ondrejka suggested that government agencies and those creating applications that use open data “write less code, get more data.”

When it comes to resources, he asked, “who’s cheaper: a silicon or carbon employee?”

His observation that social computing platforms will “require different level of trust, support and information” is apt; citizens now have different expectations from a government that’s gone online than existed in an analog world.

As Ondrejka put it, online users represent the “largest focus group in the world.” And in that content, he says, there is a role for government innovation, and it should be occupied by both leaders and citizens.

Ondrejka provided one more “analog” example of how government data was used in the 1800s. By studying harpoon designs, Maury found that many whales in the Pacific has previously been harpooned in the Atlantic and vice versa. He used that as evidence of a Northwest Passage. While that didn’t go well for subsequent explorers who went north and ran up against a frozen ocean, the ’49ers were able to use the data to reduce the length of time it took to get around Cape Horn. In those days, it took more than 200 days to travel from New York City to San Francisco. 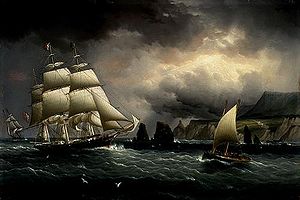 The Clipper Ship "Flying Cloud" off the Needles, Isle of Wight, by James E. Buttersworth, 1859-60

As the Gold Rush was on, time was at a premium, and for “extreme clipper ships” like Flying Cloud, any advantage that could be derived from patterns in the data had economic value.

A similar parallel to innovation using government data can be seen today in the use of the global positioning system (GPS) that the U.S. funded.

With any of these technologies, however, there’s a long-standing pattern in technology adoption, the data around which follows a “fairly predictable” curve, said Ondrejka. That “linear to exponential” is something that’s been true in multiple technologies, from email to the VCR to the DVD to social media platforms like Facebook.

In government, however, applying such technology has multiple considers, including regulations, transparency and cybersecurity.

Measurement is key. “Stay out of the Church of Assumption,” he said. “The plural of anecdote is not evidence.”

Concerns about data ownership are also central, as are questions about vendor lock-in or the use proprietary formats. “We need to be careful about not releasing the data that taxpayers pay for,” said Ondrejka.

View this document on Scribd

Another weekend, another unconference. I’ll be at the Government 2.0 Camp in LA this Saturday and Sunday.
As is the tradition at most unconferences, attendees went around the room and introduced themselves with a name, affiliation and “three words” to describe themselves.  Here’s the Wordle I created from them: