National Institute of Food and Agriculture (NIFA) launches in DC

And, it being 2009, you can followed NIFA at @USDA_NIFA on Twitter.

According to Secretary Vilsack, ” NIFA will be the Department’s extramural research enterprise. It is no exaggeration to say that NIFA will be a research “start-up” company – we will be rebuilding our competitive grants program from the ground up to generate real results for the American people. To lead NIFA, President Obama has tapped a preeminent plant scientist from the Danforth Plant Science Center in St. Louis – Roger N. Beachy, winner of the Wolf Prize in Agriculture and a member of the National Academy of Sciences.”

As I mentioned on Twitter, @FoodSafety and @USDAFoodSafety are  already up and tweeting.

Among other many agricultural science initiatives, secretary Vilsack emphasized that this new USDA institution will identify agriculture opportunities in U.S. that, within 10 years, will be “net carbon sinks.”

“USDA science will support our efforts to radically improve food safety for all Americans,” said secretary Vilsack. “Each year in the U.S. alone, food-borne pathogens like E. coli kill 5,000 people and sicken 75 million more; the cost to the economy from these infections exceeds $35 billion.”

Following the Secetary’s remarks, Rajiv “Raj” Shaw, Under Secretary of Agriculture for Research, Education, and Economics (REE) and Chief Scientist at the United States Department of Agriculture, provided an overview of the different areas agricultural science could positively affect both the energy policy of the United States, food security and, in time, hunger at a global scale. 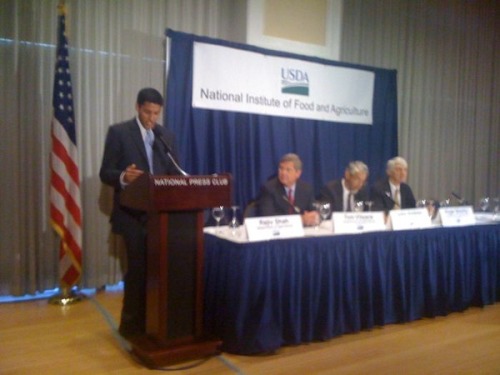 Raj Shah at the NIFA launch

Following Shah, the @WhiteHouse science advisor, Dr. Holdren, t, leavened the event with casual humor of an agricultural variety, punning his way into a wave of chuckles.

Dr. Holdren was clearly inspired by what he’d seen at the “Astronomy Night” at the White House last night.

More information and video of that event is available at http://blog.ostp.gov, courtesy of @WhiteHouseOSTP.

Video of the event, including the remarks of all three men, is archived and available on demand at VisualWebcaster.com: NIFA launch at National Press Club.