Early this morning, tweets became coming in from Baghdad from @Jack Dorsey. Here’s the picture of Jack that he tweeted on a C-130, well-equipped in body armor. 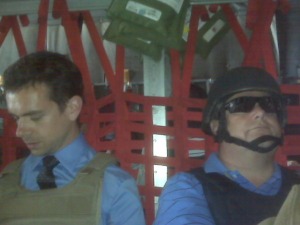 The snap was taken by Scott @Heif, Chief Organizer at Meetup.com. Jack and Scott are part of a small delegation of tech executives that were invited to visit Iraq by State.gov. Representatives from Google, Meetup, AT&T, Howcast and other tech companies will be spending the week in Baghdad. The delegation also includes JasonLiebman, (Co-founder and CEO of Howcast Media), Richard Robbins (rar624) (Director, Social Innovation at AT&T).

You can follow their trip and discussion by searching for the hashtag #IraqTech on Twitter and view their photostream on Flickr. It’s worth searching for #IraqTech at Twazzup.com at too, a new real-time search engine for Twitter. A search there show results aggregated from both of those streams.

Dorsey, is the founder and chairman of Twitter, the red hot tech company whose wildly popular microblogging social network has become the virtual water cooler of the moment. @Oprah joined Twitter on Friday. 1.5 million more people have joined since, urged on by Ashton Kutcher (@aplusk), who raced CNN (@CNNBrk) and Larry King to be the first Twitter accounts to gain one million followers.

2 responses to “Twitter, Google, Meetup, AT&T and Howcast go to Iraq for IraqTech”